Ricky was an all-star athlete in track, football and basketball during high school.  He turned down college offers to join the army right out of high school.  About five years into the army, Ricky found himself unable to use his lower extremities.  After numerous tests, he was diagnosed with Multiple Sclerosis in March of 2020.

“Ever since being diagnosed it’s been a journey.  It’s not something I’ve ever heard of.  They say it’s hereditary but I don’t know anyone in my family that has suffered through it.  It’s a chronic disease where the immune system attacks the nervous system.  I just started treatments that suppress the immune system so it doesn’t attack the nervous system,” says Ricky.

“Right after he started therapy his symptoms started to exacerbate.  He was on a steady decline for six to eight weeks, so we were just trying to work on helping him with standing because walking had become out of the question,” says Peyton, physical therapy assistant at Lemoine Therapy Services in Mansura.

“He has always had a good work ethic.  He’s always been a very, very respectful young man and had good morals and ethics that his parents built into him.  He had so much natural ability on top of that, he’s a winner,” says Ricky’s former coach, Benny. 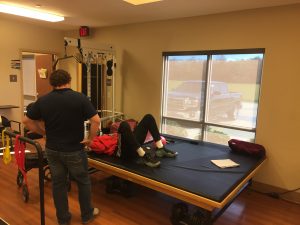 “God has a plan for everybody.  I feel like everything I’ve been through up to this point has prepared me for this.  This was always planned for me.  I feel like it’s just another test that God has put in front of me,” says Ricky.

“He’s by far our most optimistic patient.  He’s always smiling, always laughing.  He’s like the life of the gym when he comes in, which says a lot.  You know, he has every reason to be down but he’s not,” says Scott, physical therapist at Lemoine Therapy.

After weeks of treatments and therapy, Ricky is finally able to walk without assistance.

“Therapy is a big role in it.  Without therapy I would be at home doing nothing, or not really doing that much.  The equipment they have, the therapists they have here, I’ve just learned so much from them.  Even the basic stuff they teach me, it’s been really helpful,” says Ricky.

“Ricky was a really high level athlete and could have played division one sports.  For anyone to experience what he’s been through would be devastating, but because he was at the level he was his fall was even greater than the average person.  Throughout this whole process, Ricky has never been down on himself, depressed or negative at all.  He’s been motivated, positive and had the best outlook.  I don’t know how I would react under those circumstances if I encountered the things he has as a young man.  His journey has definitely been inspirational for me,” says Peyton.

“The man upstairs has a plan for all of us and he picked Ricky for a certain reason.  I think for Ricky to show what hard work and perseverance can do,” says former coach Benny.

“If I could give any advice to others going through a similar situation it’s to stay prayed up.  God is number one.  Stay prayed up and keep going to therapy.  God and therapy, keeps me going,” says Ricky.

To learn more about the services Lemoine Therapy offers or to locate a clinic near you, visit our website at www.therapyctr.com.