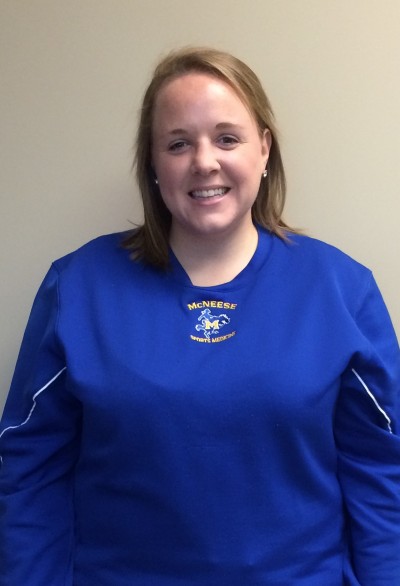 Ashley Nichols, MS, ATC, LAT, is from Madison, Alabama and attended the University of Alabama where she received a Bachelor’s degree in Athletic Training. From there Ashley attended McNeese State University where she pursued a Master’s degree in Exercise Physiology. Ashley began working as an Athletic Trainer for Therapy Center in July of 2014, covering the areas of Welsh, Lake Arthur and Lacassine.

Ashley chose the field of athletic training because she was once an injured athlete who went through surgery and rehabilitation. Because of that experience, she thinks its interesting to be the one behind the scenes of athletic care. The most rewarding part of her job is after an injury occurs, she is with them during recovery and can watch them return to play. Ashley says that her favorite part of working for Therapy Center is meeting new people and learning the “Cajun way” from her work peers.

Ashley is also giving back to students who choose the same career. She serves as a preceptor for the student athletic trainer program through McNeese State University.

For more information on Therapy Center’s Athletic Training program, call our outpatient clinic in Jennings at 337-824-4547.