Therapy Center strives to be the leader in industry news and resources. We found this article from Media Health Leaders to be of great interest to our audience with the impending expiration of the SGR patch coming on March 31st.

“The perennial problem in Congress over how Medicare reimburses physicians is providing an opportunity for the foes of fee-for-service medicine,” Christopher Cheney. 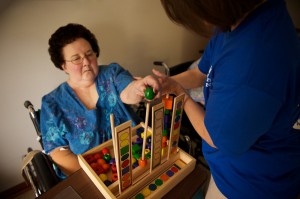 By:  Christopher Cheney, for HealthLeaders Media

Over the past dozen years, Congress  has repeatedly patched Medicare’s widely despised Sustainable Growth Rate formula for physician reimbursement. The temporary SGR fixes have featured a cast of usual suspects of Medicare budget offsets: cuts to provider  payments or offsets affecting Medicare beneficiaries such as cost-sharing  through deductibles.

The “pay-for” problem was on parade last week in Congress during a two-day hearing of the House Energy & Commerce Committee’s health panel. Republican members of the health  subcommittee appeared unified on the necessity to find budget offsets for any  long-term replacement of SGR.

For those members of Congress contemplating SGR legislation without offsets, the health subcommittee’s  chairman issued a warning rooted in realpolitik during the opening session of the hearing Wednesday: “Think of what your goals are. The danger is, and it’s a high risk, nothing is going to happen,” said Rep. Joe Pitts, (R-PA), evoking the specter of another SGR patch.

A six-member panel of witnesses appeared  before the House lawmakers on Thursday, and unanimously opposed offsets drawn  from their constituencies.

Robert Umbdenstock, president and CEO of the Washington, DC-based American Hospital  Association, opened Thursday’s witness testimony with a flat-out rejection of any solution that requires offsets from healthcare providers. “The AHA cannot support any proposal to fix the physician payment problem at the expense of funding for services provided by other caregivers. Offsets should not come from other providers, including hospitals,” he testified.

Umbdenstock and Schneidewind were the only witnesses to propose specific SGR repeal offsets during the health subcommittee hearing Thursday.  Offsetting SGR Repeal With Medicare Reform Windfall Accelerating value-based healthcare payment and delivery reforms could not only pay for replacing SGR but also improve quality of care and reduce long-term Medicare spending, according to reform advocates and some members of the E&C Committee’s health panel.

Alice Rivlin, PhD, director of the Engelberg Center for Health Reform at The Brookings Institution in DC, acknowledged during the hearing the political necessity of finding offsets, but urged lawmakers to launch a wave of value-based reforms in Medicare.

“Replacing the SGR can advance payment reform,” she testified. “It can move the healthcare delivery system away from fee-for-service, which is still very prevalent in Medicare, which rewards volume rather than value, and move it toward higher quality and less waste. And that’s good for everybody, especially beneficiaries of Medicare.”

While directing a question to Schneidewind, Rep. Doris Matsui, (D-CA),  called for Medicare reforms to be a prime component of any long-term SGR repeal deal. “New payment and delivery models incentivized in SGR repeal-and-replace policy can make Medicare services more effective and maybe even more efficient. This will save money, while improving care â€¦ and involve savings to the overall health system, not to mention the improvement in the quality of care that can have an invaluable effect on a patient’s life,” she said.

On Friday, a veteran of many SGR  battles in Congress who serves on the E&C Committee’s health panel said he was skeptical that value-based reforms in coming years can be the featured financing element for a doc fix now.

Rep. Michael Burgess, MD, (R-TX), said Medicare reforms will be accounted for in any long-term SGR repeal deal, but that more traditional offsets will be necessary. “[Reform] is going to be part of whatever group of offsets that’s decided upon but I don’t think there’s enough offset there. It’s a struggle to get that up to a number that’s enough for a complete offset given the way the budget folks look at such things.”

Burgess, who practiced medicine for nearly three decades in North Texas, said the CBO is unlikely to “score” the cost-savings from Medicare reforms high enough to pay for the doc fix. “If CBO would score things by what they save and not what they cost, we maybe could. That gets into the whole CBO scoring legislation that we have had for years,” he said.

The Texas Republican also said it is unclear whether a majority of lawmakers in both houses of Congress can shun the historical approach to SGR offsets and bank on reforms to finance a repeal-and-replace deal. “That is to be determined. I just don’t think there’s any way we can answer that right now,” he said.

“The problem is, Congress has been led to believe the only way to deal with this is to cut something else,” Harold Miller, president and CEO of the Pittsburgh-based Center for Healthcare Quality and Payment Reform, said after the hearing. “The way to  get the offset is not by cutting someone else’s fee, it’s by redesigning care.”

Miller said the Medicare Shared Savings Program, the government’s most popular accountable care organization initiative, is “still fee-for-service” and does little to fundamentally shift providers from volume to value. He believes MSSP gain-sharing only offers an incentive to boost efficiency in fee-for-service operations,  with providers grabbing a slice of the cost savings.

The CHQPR report calls for the Centers for Medicare & Medicaid Services to rapidly deploy three accountable payment models that have demonstrated effectiveness:

Bundled payments: Allowing providers flexibility to redesign care at reduced cost.  “The CMS bundled payment initiative saved an enormous amount of money,” Miller said.  “The demonstration has already proved that it is going to work.”

Warrantied payments: “It’s the same idea as a warranty on anything else you buy. Now for infections and complications, we pay the doctors more to treat them, we don’t pay doctors anything for preventing themâ€¦ Providers make much more profit if you have an infection or complication.”

Condition payments: “The orthopedists get paid a ton of money to perform a back surgery on you. But they get paid next to nothing to manage your pain or otherwise treat your condition.”

“Either the CBO can give it a  score, or Congress can say that it will save money,” he said, adding federal officials can move quickly to enact accountable payment models.  “The [Diagnosis-Related Group codes] were implemented in 14 months starting in 1983. They can do it.”

If you want to learn more about how Therapy Center is working to help Medicare reform and serving as a post-acute resource for patients and referral sources, contact Brittany Bodden for more information on our programs and continue to follow our blog.