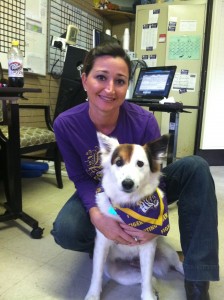 On Thursday, July 7th, I noticed an article in the Gueydan newspaper about a dog who was looking for a “forever home”.  Her foster parents were concerned that she may never be adopted, and resorted to putting an ad and photo in the newspaper seeking a family for her. I’ve never owned a dog, and didn’t consider myself to be a “dog person”; however, I was wrong. It was love at first sight.  I learned that Abbey, the Border Collie mix, had been surrendered by her owner at the local animal shelter and was scheduled to be put to sleep due to her age and the need for space at the shelter.  Second Chance Paws, a volunteer organization dedicated to help give rescued dogs a second chance, pulled Abbey from the shelter the day she was scheduled to be euthanized. She was given that second chance.

Abbey immediately displayed love and affection for her new family.  She was very attentive when spoken to and was easily trained in basic obedience skills.  With 3 children, I quickly noticed that Abbey preferred to be in a calm, quiet room of the house where she could nap in peace.  At times when the children accidentally stepped on her tail or bumped into her, Abbey was able to walk away without showing aggression toward them. Abbey was reliable with her good manners and social skills.  Although I thought Abbey was going to be our family dog, Abbey decided that she wanted more…

After a wonderful weekend of getting to know and love Abbey, I returned to work on Monday raving about her!  The Gueydan Nursing home had a “pet” once before, a cocker spaniel who lived outside the therapy room.  However, he was so mischievous and rambunctious that he hardly stepped a paw into the nursing home.  Fortunately he was adopted by a family and loves his new home!  Knowing the kind of dog my Abbey was, I spoke with our administrator and staff at the nursing home about the possibility of Abbey joining me at work.  With their blessing, Abbey has been coming daily to Gueydan Memorial Guest House with me for the past four months! Upon veterinary exam, Abbey was guessed to be about 8-10 years of age. And as a senior citizen herself, Abbey fit right in at the nursing home! 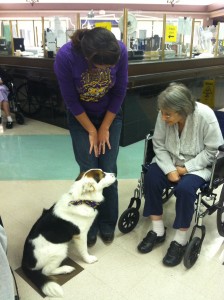 Abbey’s expressive eyes confirmed what I felt all along.  She wanted to be a part of something bigger.  In the nursing home, Abbey was embraced by dog lovers of all ages, and she was able to become part of the Gueydan Memorial family.  Abbey’s story quickly spread throughout the nursing home, and many residents brought their families and loved ones by the therapy room to see her.  Abbey’s presence in the nursing home had many residents reminiscing of their former pets and sparked a joy for animal lovers. At that time, Abbey’s role in the therapy setting was both casual and unstructured. Abbey was able to “socialize” within the nursing home community as a companion to those around her.

With her changing role in the nursing home, both Abbey and I will be participating in a series of tests in order to become a “trained human-animal team” through Pets for Health and Delta Society Pet Partners.  These organizations provide strict guidelines, training, evaluations, registration and liability insurance for Abbey and I to become a registered therapy team.  As a therapy team, we will be trained and tested in the Canine Good Citizen Test, which consists of nine parameters including accepting a friendly stranger, sitting politely for petting, appearance and grooming, walking on a loose leash, walking through a crowd, sit and down on command/staying in place, coming when called, reaction to another dog, and reactions to distractions.  As Abbey’s handler, I must complete either a Delta Pet Partner Weekend Workshop or a Home Study Course, pass a written exam, and pass the Aptitude and Skills Test with Abbey. In addition to re-evaluation every two years, and continuing education requirements, Abbey will be required specific inoculations as suggested by LSU Veterinary School, and a systemic medication regime for heart worms, fleas, etc.  As a team, we will be trained to provide volunteer services including Animal Assisted Activities (AAA) and Animal Assisted Therapy (AAT). Typically AAA involves visiting in hospitals, nursing homes, pediatric units, emergency rooms and intensive care units where we would bring joy, comfort and compassion to those in need, while AAT is typically goal oriented.  In my case, as a Speech Therapist, I would direct the interaction between Abbey and the patient as a therapeutic modality, such as assisting with memory skills and increasing social interactions.  Examples of these human-animal teams are seen during the week in places such as Lafayette General Medical Center’s inpatient rehabilitation unit, Our Lady of the Lake, Women’s and Children’s Outpatient Rehabilitation, as well as several other hospitals and nursing homes. 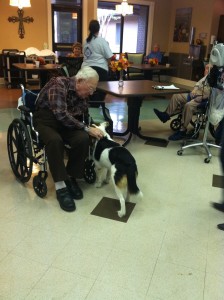 Every morning when we arrive at Gueydan Memorial, Abbey greets the residents with a friendly sniff and a wagging tail! In the past four months, several residents in Gueydan have purposefully participated in Abbey’s care by supervising her outdoor activities, brief dog-sitting, and grooming.  Because we work in the “Duck Capital”, Abbey has been invited on several hunting trips in the marsh and has posed with resident hunters and their trophies for photos. In a way no medication or no one else could, Abbey has brought meaning and purpose as well as joy to one particular woman suffering from depression.  Another patient suffering from severe Alzheimer’s disease and has difficulty expressing meaningful speech, was able to speak directly to Abbey with love and was easily understood. 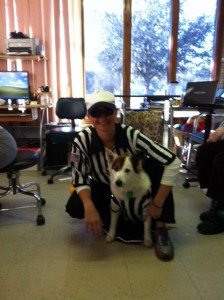 Abbey has a huge heart and just wants to give love to those around her. Although it would be easy for me to take the credit in Abbey’s good behavior and mannerisms, the truth is, she is so attentive and eager to please that she simply trained herself to be the perfect dog for both my family and the Gueydan Memorial family. Every time I think about the joy she brings to all of those around her, and how grateful I am for finding her, I know Abbey is even more grateful to continue her life and share it with those around her.

A special thank you to my employers at Therapy Center, the administration and staff at Gueydan Memorial Guest Home, the volunteers at Second Chance Paws, and the volunteer coordinator at Pet’s for Health, Ms. Merlyn C. Hering.  Abbey and I are grateful to have this opportunity to increase public awareness of the therapeutic benefits of human-animal teams in the rehabilitation setting.

Please continue to follow Abbey and Jeanne’s story on our blog.

Here are a few other interested links to the therapeutic benefits of pets.

The Therapeutic Benefits of Pets

5 Ways Pets Can Improve Your Health